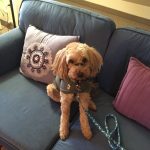 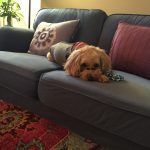 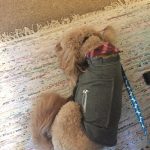 When I first got my mini goldendoodle, Malcolm, in 2009, my dream was to take him to work someday.

I had observed firsthand the healing presence of dogs across a variety of settings, from schools and libraries to nursing homes and hospitals. During my master’s program, I wrote a research paper on animal-assisted therapy, arguing that integrating friendly dogs into a treatment setting could enhance the experience of therapy as well as strengthen the relationship between therapist and client.

Then, to be honest, I dropped the ball with training Malcolm. I prioritized it for awhile, and he earned his Canine Good Citizen certificate when he was about 1, but then a bunch of life milestones distracted me from keeping his skills sharp. He became barky — hypersensitive to any noise that could indicate a person approaching the door, overexcited when we’d get home from work, overanxious when other dogs were around. He has always been an affectionate, cuddly guy who loves people, and he settles down fast. But once the barking got bad I kind of gave up on the idea that he’d ever work with me in the therapy room. I assumed he’d be too disruptive, and I felt powerless to change the behavior.

Fast forward to now. I moved into my new office space over the summer and began to reconsider my options. I realized that if I wanted to work with him on this, there was nothing stopping me. I read up on ways to extinguish problem barking. I started getting him used to a new collar called Gentle Leader, which helps encourage him to stay tuned into me and also gives me a way to interrupt the barking impulse in a humane way. He won’t wear it all the time — only when he’s working. And once I’m confident that he’s going to stay quiet at the office, we’ll experiment with taking it off.

So, we are giving this a shot! Yesterday was his first day at work with me

He barked a couple of times but responded to redirection. He greeted each client with love. He is showing me that he is capable of learning something new. I know in my heart that if he can work with me a couple of days a week, it will be good for him (he likes having a job) AND awesome for my clients. And it will give me an excuse to go for a nice long midday walk when he’s with me 🐶

What would you conquer if you knew someone had faith in you — or if you had more faith in yourself? 💜

Posted in Uncategorized
← Meet the man who ‘discovered’ burnoutThanksgiving Stress-Busters →